Due to a move with getting out of shape, an enforced period of inactivity after surgery, medication changes, and vacation in several places, I’ve replaced muscle with fat. This means over half my bras don’t fit. Too tight or too small in the cup. I’ve been putting bras in storage (some which I was waiting on wearing until others stretched out) and had to buy a few new ones. Some of them I will give away, and some I might try reselling. It’s been a while since I measured myself anyway. The older bras will be on standby if I get into a different shape. I changed gyms since the move and now go to the Y for weights and stationary cycle at home while reading.

I made myself a new rule: anything that doesn’t fit right now goes in a suitcase. Looking at it in the drawer is just depressing. I do this monthly. The new arrivals I’m rocking include Curvy Kate’s Dita and the Masquerade Antoinette. The new arrivals that did not rock with me were two Claudette Dessous. I will review them all for you as life slows down a bit.

I received my order from Pillowbook and am floored by the lovely silks. Before I get pictures of the treasures on I recommend you check out their site for Far East lingerie with geometric flair. Their showcase garment is the dudou, an evolution of a tied top dating back to the Ming dynasty. Also, check out the Mondrian capsule collection (thanks Caro!). I never thought I’d enthuse over the use of corners in lingerie, but life has taken me stranger places.

Over vacation I went to the Taza chocolate factory and I must say I ate the chocolate covered cashews too fast. Worth it, though. They’re out of stock in the online store right now:

I don’t usually hand-wash my bras. I know, I know that it shortens their lives. I don’t have a big basin or room for one, and doing them one or two at a time in the sink is not something I want for all my bras. I do have a few bras and garments that I consider precious, though, and I use Eucalan on them because it is clumsy-proof. No rinse! No rinse makes all the difference, and it works.

I love stuffed animals. Above is Umbreon in a pillow fort (paging Windie Gardie), who needed a bath. I submerged him in the sink with warm water and a tablespoon of Eucalan. I came back to him a half hour later, squeezed him a bunch to get the water. The results were successful enough that I gave Madame Sylveon (below) a pedicure in a similar fashion, as her paws had gotten dirty. The grime came out in the water and her feet were as pink as they should be.

My friends who knit use Eucalan to wash their delicate fabrics. They have a host of other uses, too. I’ve been using lavender and it doesn’t irritate my allergies, but they have a fragrance free version called ‘Natural’ as well.

In the US, you can get Eucalan from Amazon as well as yarn and fabric stores. In other countries, you can use their store locator. 9-15 USD for a 17 oz bottle, which says it’s good for 95 washes. For those who like to buy in bulk, a gallon is currently $45-70 on Amazon, good for 760 hand washes.

For years I’ve heard that Freya’s half-cups are good for full-on-bottom or shallow profile breasts. The designs, though, didn’t inspire me. Floral, polka dot, funky prints…there were some cool longlines like Pansy, but they didn’t come in the simple half-cup version. In the fall Freya debuted the Rapture, which came in a padded half-cup and a side support plunge. This review is about the half-cup. 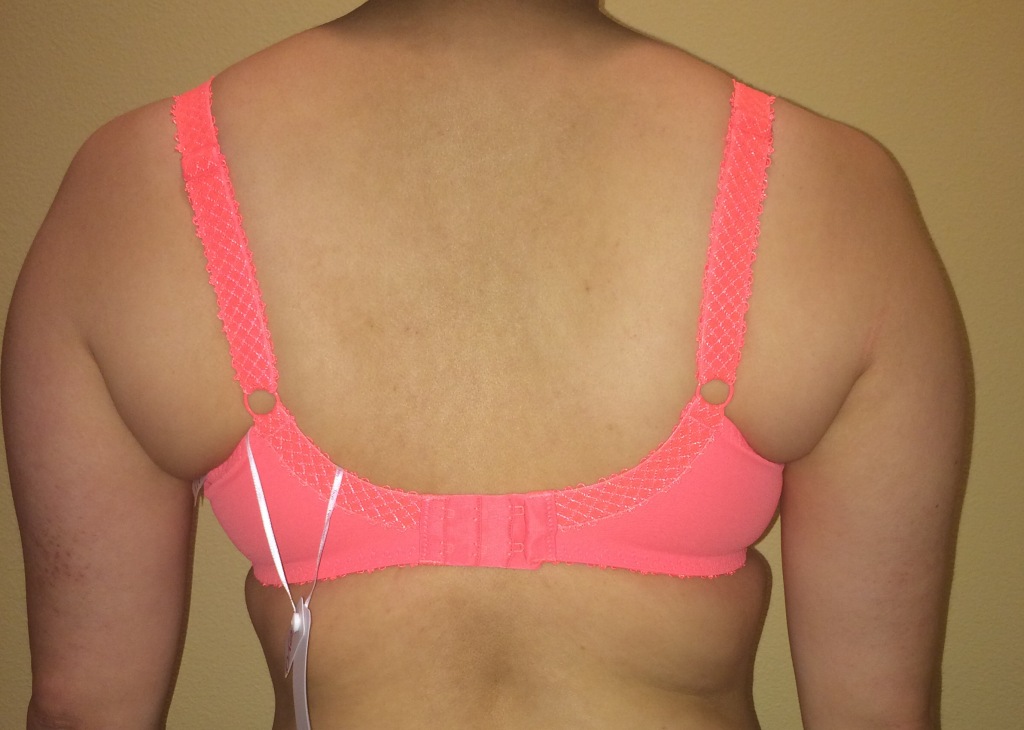 Usually I wait until I’ve worn a bra for a while, but since this is a current style that will only last another six months, I’ll do this sooner rather than later. I kept the bra in storage to rotate in, but right now it’s too small for me to wear consistently.

Vertical seamed (two of those seams) padded bra. Two hooks in the back. Fully adjustable straps leotard-style with nubbly bits on the side so the adjustor doesn’t slip.

Band is pretty stretchy for a 34 (dig my ribcage flare!). It’s open on top, which is pretty forgiving. I’ve gained weight since I purchased this bra, so it’s too small in the cups, which makes it probably true to size. The bottom of the cup is not especially projected, so I don’t quite fill it. The fabric doesn’t buckle because it’s not quite shallow enough for that. In my case, it spreads my breasts across rather than projecting, so there’s less of an insecure feel than a very projected bra. I would not recommend this bra if you have very projected breasts or very firm breast tissue. I would recommend trying it for average to shallow breasts which are average-width to wider. 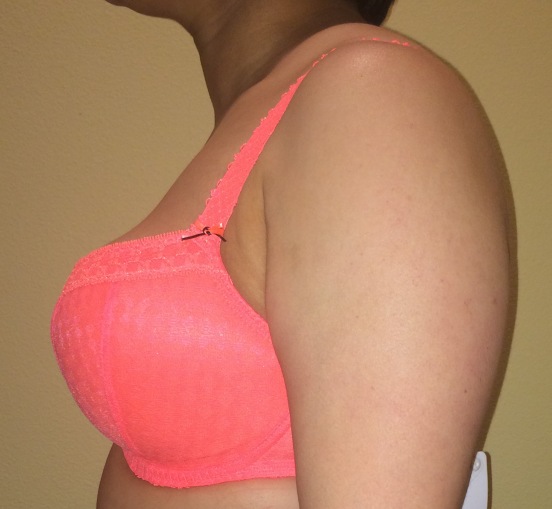 Geometric lace in diamond patterns. This color is ‘neon’. Yes it is. Bright highlighter orange-pink that makes my skin look darker. I love the color so much I don’t care if it’s flattering or not. The seams offer a slight contrast, and the black on the ribbons sets the rest of the grapefruityness off well. Rapture gives me some lift and makes my breasts look shorter. This makes it more convenient for some shirts, less so for others. The seams show up under close-fitting knits but not looser t-shirts. I am sad I cannot wear it now. Maybe in the future? Maybe I give it away?

Murchie’s Harlequin Rooibos. No caffeine, but peppery, chocolatey, with a bit of cinnamon and cardamom. A standard base with a kick, just like the color of this bra on a well-known frame. The cornflower sets it off a bit just like the black highlighting on the ribbons.

Rapture is out this spring in a terrifying bubblegum color. The side support plunge is a new frame by Freya. I like that they’re trying new styles and not just prints. Have you tried tried Rapture? What did you think?

This is a Body Snark Free Zone, humans!